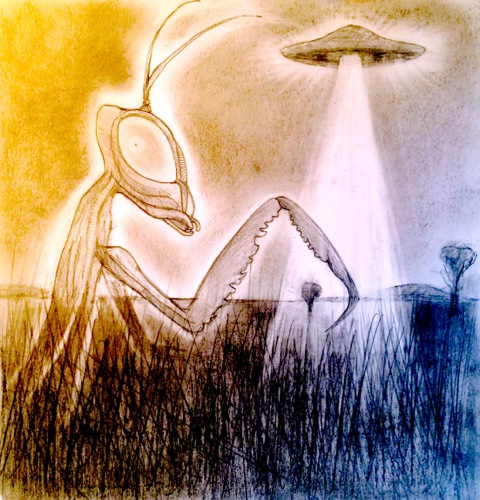 Meeting on the Prairie

Yes, it was a truly beautiful place, a sacred place, the prairie of tall grasses that stretched on and on, into the glowing horizon. Peaceful expansive nature in every direction, a cool gentle breeze turning the grasses into a mesmerizing sea of infinite rhythm in slow motion, the aroma of deep coherence. But the beauty in itself wasn’t enough to explain the intense excitement that was gurgling in my spine and making my hair stand on end. I had been here many times, to hunt, to collect myself, passing through on my way to neighboring villages. But this time felt different.

My breath was getting faster, and in my excitement I stumbled forward as some mysterious force urged me on deeper and deeper into the vast savanna. I felt my body gripped by contractions of life force energy pulsing up my legs, my spine. Suddenly I came to a stop, elated yet increasingly unsettled by the feeling that something inexplicable was about to happen. What is happening to me? I thought.

Then I saw it. Hovering silently about 100 feet above the prairie in front of me, a silver disk, gleaming with blue-white light of indescribable intensity. Below the craft a beam of white light lit up the late afternoon grasses, making them look like they were on fire with white plasma. My mouth agape, I found myself utterly entranced by the sight, unable to process what I was witnessing nor incapable of looking away. I suddenly realized that something that I would never have guessed was possible, even thinkable. Down beneath the surface of my conscious thoughts, I realized that I in fact did know why I was supposed to be here, that I somehow had agreed to meet someone here. But a meeting with whom?

As the craft slowly moved towards me, my fear increased as I braced for some kind of encounter. As the energy inside my body increased, I felt as if every single cell in my body was starting to vibrate at a higher frequency. I yelled as I felt my body disintegrating into a frenzied pattern of excited energies, but I could no longer make a sound. The world was becoming a blur, my awareness now losing focus as I felt a tremendous force sucking me upwards. Is this the end? I managed to think before everything suddenly went black.

The next thing I recall is that I am in an enclosure of some sort, a round room. I’m on the ship! As if looking through a thick fog of perceptual dissonance, I start to make out some of the instrument panels, glowing red and orange lights, and a center console in the middle. And there I see him, the mantis being, my guardian! I am there for a lesson, a briefing. Now suddenly a flood of recognition fills my awareness. Yes, I have been here before. This is my guardian spirit, who I now realize that I’ve known since even before I was born into my current lifetime. I would receive insights into my relationship with him through my retrieval of this encounter that would bring some dramatic changes into my psyche and my body.

“When you entered the craft” Ellen relayed to me after my session was over, “the entire room turned blue and we were there with you!” The memory relayed above is from a regression hypnotherapy session I underwent in December 2014 with two wonderful therapists, Ellen Pavent and Lisa Shusta (Source of Life Healing).  Inspired by the writings of Dolores Cannon, I had wanted to experience her particular  hypnotherapy method and was delighted to find two therapists who had been personally trained by her, and who happened to live close by.

According to Dolores, her approach to hypnosis which she terms ‘quantum hypnotherapy,’ is much more effective than the forms of hypnosis practiced by the likes of John Mack or Budd Hopkins, being able to access the deepest levels of the unconscious mind. I had been drawn to Dolores’ writings because they offered direct transcripts of hypnotherapy sessions with her patients, and therefore a unique perspective on the extraterrestrial contact and abduction phenomenon free from wild speculation and theorizing which easily obscures the more empirical aspects of these encounters.

But I also had a more pointed interest in contacting Ellen and Lisa. Following on the heels of the last medicine circle in August 2014, I had been feeling an increasing tension between my ordinary experiences of reality living and working and playing, and the unbelievable new dimensions and relationships that were becoming increasingly real to me through my work with Ayahuasca. Must these two realities compete for my engagement, or do they fit together into some larger picture? Later in the summer, during a writing meditation, I wrote the following poem which captured this feeling.

Dolores’ Cannon’s last book, The Three Waves of Volunteers and the New Earth had really captured my imagination, and spoken to one of my most persistent energy blockages: my profound impatience with my own spiritual development. Why are you so impatient with yourself? I would find myself asking. Since I had discovered the spiritual path in my early 30s, largely due to my great luck of getting back together with my high school sweetheart Jen Taylor after divorcing my first wife, I had been exponentially increasing my efforts: meditation, yoga, community involvement, forgiveness, vegetarianism, kinesiology, T’ai Chi, A Course in Miracles - all slowly but surely nurturing my passion for peace, opening my heart, helping me to undo my ego. And yet I found myself as judgmental and critical and impatient as ever with my own efforts. The anger that had come out of me during the August 2014 Ayahuasca ceremony was connected to this: intense rage directed at myself first, and then to all the perpetrators of violence against the Earth.

This impatience is what Dolores’ story of the volunteers directly spoke to and began to shed light on. Despite the truly blessed life I’d been gifted with - loving and supportive family and friends, a beautiful home and environs, many opportunities for growth and self-expression - I had always felt deeply alienated, in some way I could never make sense of - both from my home and from my body. It wasn’t that I wanted a different home or a different body. It was more like having a body at all felt frustrating, and that being on Earth itself felt like a displacement. But this feeling made no sense to me, so I always interpreted it as simply an aspect of my unexplainable morbidly introspective personality.

The story of waves of volunteer spirits who choose to incarnate on earth, choose to descend into matter and limitation and madness, and through a process of imposed amnesia, forget their true nature; this was the first lens that allowed me to begin to appreciate my impatience. As Dolores’ describes the volunteers, 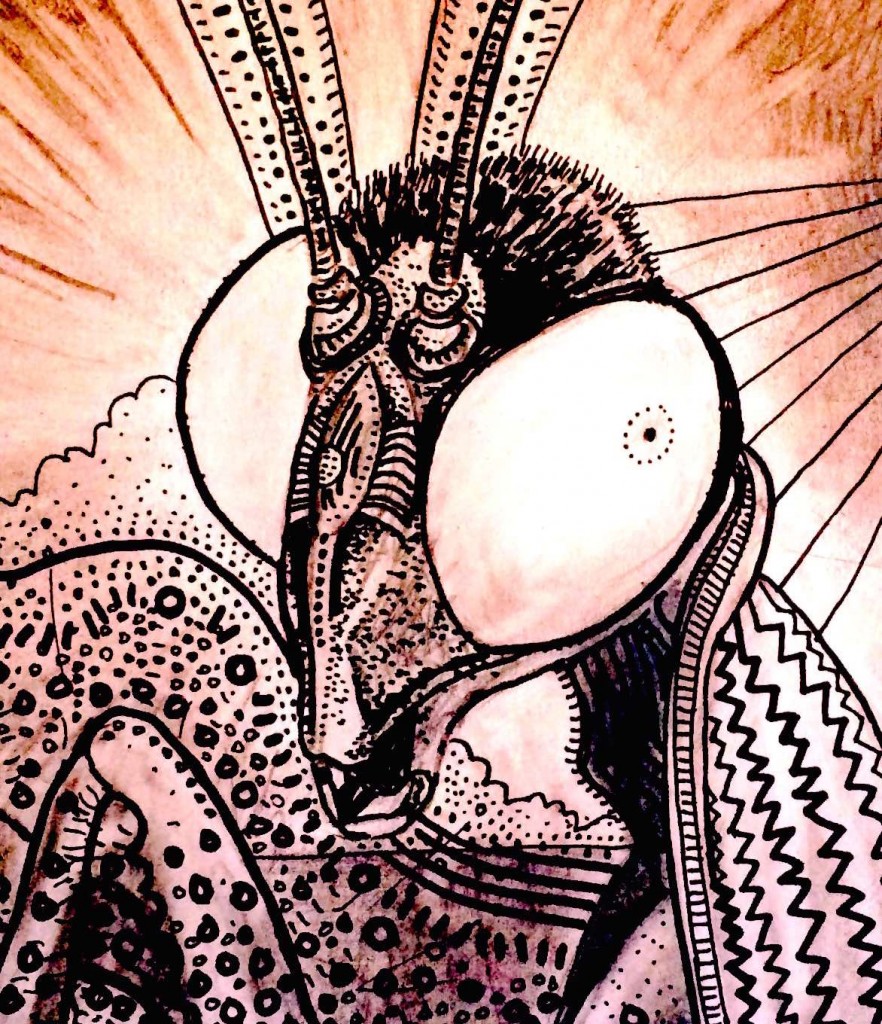 Earth is a school that we attend and learn lessons, but it is not the only school. You have lived on other planets and in other dimensions. You have done many, many things you cannot even imagine. Many of the people I have worked with in the last few years have regressed to lifetimes where they were light beings living in a state of bliss. They had no reason to come to Earth’s density and negativity. They volunteered to come to help mankind and the Earth at this time… They have come at this time because most of those people who have been here for lifetime after lifetime have become bogged down in karma and are not advancing. (p.9)

Because it is their first time incarnating on Earth, volunteer souls have difficulty fitting in, and often feel imprisoned and limited and not at home in their bodies. Some of them try to commit suicide, others become deeply introverted, even though their fundamental purpose is to share their higher, more peaceful, energy signature with the beings mired down in the denser energies of anger, fear, guilt and craving addictions: karma.

As I meditated on this extraterrestrial narrative, I felt like for the first time, my feelings about my body and my place in human society were being clarified. Instead of seeing my struggle as one of overcoming body limitations, of escaping the pathologies of human society, I began to look at it from the opposite end of the telescope. As a light being essentially free from the confines of space and time, I had deliberately taken on these limitations as part of a larger metaphysical-spiritual purpose: to help to change the energy levels of the Earth. My body wasn’t something to overcome, it was something I had taken on, a tool to work with. Suddenly, a new level of patience and acceptance of everything in my life began to dawn.

This metaphysical picture was something that I was also learning from A Course in Miracles, which teaches that we are fundamentally light beings who only seem to be limited by our bodies. But since our bodies are actually only really virtual avatars which we are controlling, we cannot be harmed by what happens to them. In the Course perspective, the cultivation of this perspective is precisely the path to overcoming our fear and guilt, and to experiencing “The peace of God that passeth all understanding.” If you have ever had a lucid dream, where you become aware that everything that is happening around you is your own dream, then you understand the release from any possible fear, the excitement, of that turn of perspective, from victim to author; the discovery that anything is possible. Often when this happens to me, I get so excited I wake myself up and lose the awareness. It’s as if I cannot handle the rush of energy, and the new responsibilities which come with having so much creative power. I’ve begun to see this as an allegory of waking life: learning to hold the medicine down.

This reversal means that, the limitations and challenges we face in life, from mundane feelings of discomfort to facing death and separation, are all willfully taken on, as tests, lessons, forgiveness opportunities; not reasons for fear or judgment, but opportunities to transmute our beautiful inner light into physical form, to raise the vibrational reality of life on earth to a higher level of coherence, peace, love, Truth. That’s what I meant in the poem above when I wrote “Anger and fear are my wall and the energy I need to climb the wall. Impatience is an orb tossed at me by the Void.” But I still felt stuck.

All of this led me to my hypnotherapy session with Ellen and Lisa in December 2014...   continued...

One thought on “My Mantis ET Encounter Part 4”