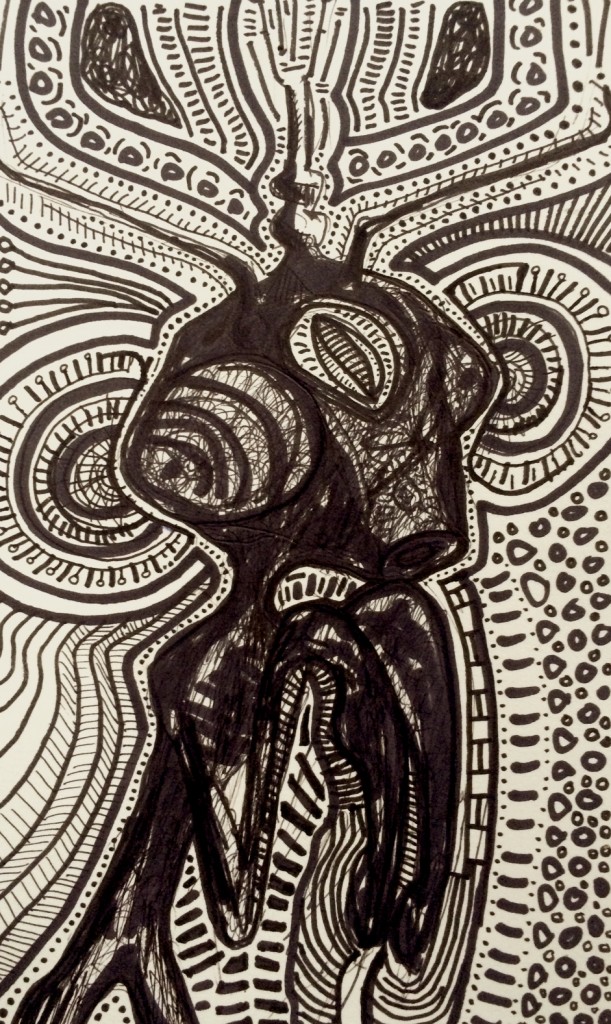 As I started to examine  strange new fracture lines in my rapidly crumbling worldview, I pondered the meaning and reality of this new Mantis figure in my life.  How could this possibly be real?  And yet there was an emotional intensity, a bizarre spiritual passion for him, that came out of nowhere, and called out for some kind of explanation.

Never in my life had I so much as had the thought that such off-world or higher-dimensional beings exist, let alone that I might find myself in contact with such a mystery.  Even more strange and unbelievable to me was the sense that this relationship was old and ongoing, that this being was a kind of guardian to me.  What to think, do?

This sense about the relationship was not something that dawned on me only later, but was rather disclosed at the very beginning of the encounter, along with some other aspects.  Or so was my experience, my first impression or “download.”  His gender - male - was also instantly understood, along with his age - very old, maybe hundreds or thousands of years - and that he was somehow involved with my evolution, my kundalini awakening and undoubtedly many other processes in my earlier life.

During the initial Ayahuasca Ceremony encounter, he was positioned next to me on the left, and seemed to be directing forces around me, overseeing the process.  Read My First Mantis ET Encounter story.  My first spontaneous reaction to his presence was extreme excitement, awe, shock, but also surprisingly, deep gratitude and even love.  As I alluded to already, without this powerful, inexplicable emotional complex, the experience would, I think, have been abstract and more of a kind of hallucination. But with the emotional charge, it felt like just the opposite; It was more real than normal reality, more familiar and trustworthy than a lifetime of experience.

This hyper real quality to the experience is something that comes with Ayahuasca and of course many other kinds of mystical experiences.  It is similar to the experience of awakening from a hyper real dream, a sense of surprise both at how convincingly real the dream you were having was, and the sense of unquestionable certainty you now have that you are actually awake.  And yet, after you return to your normal consciousness after an experience like this, it can be difficult to ‘integrate’ this new information.

This phenomenon is what the famous Ufologist, John Mack, refers to as ‘ontological shock,’ when your entire worldview is challenged, your sense of what is truly real, a kink in your metaphysics.  What seemed to be real can start to feel like a dream if there’s no place to fit it back into so-called normal reality. How do I hold onto this? Or should I just let it go? In the months after my experience with the mantis, these thoughts were on my mind. 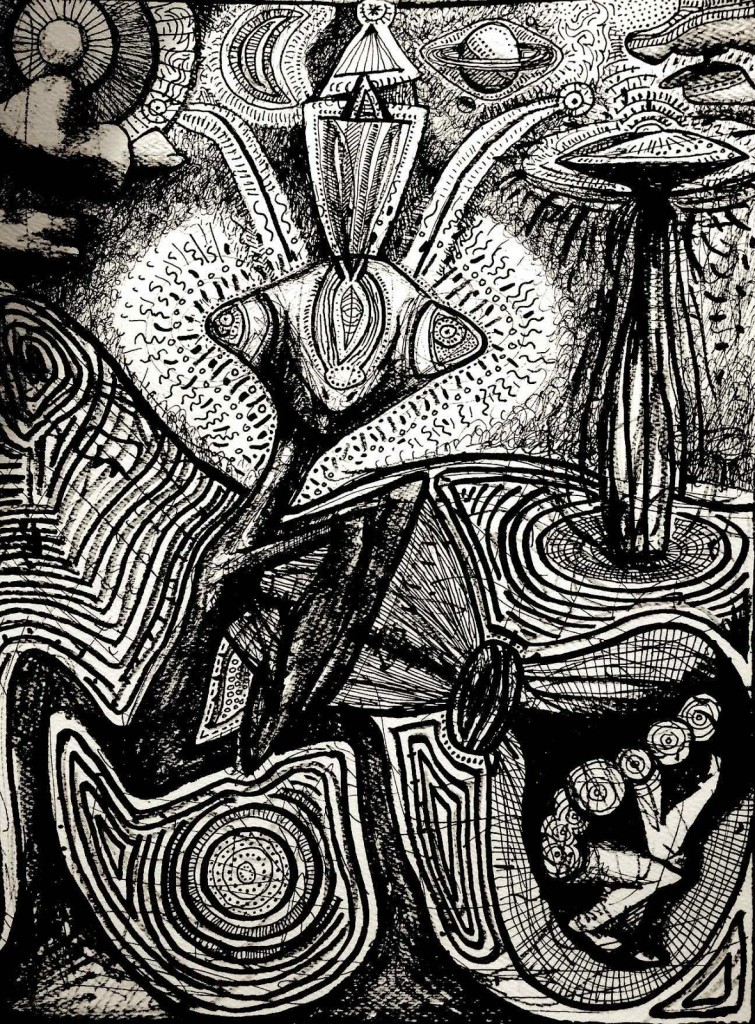 Until the next medicine ceremony, about six months later, the two ways I explored my relationship to the mantis were one, through my artistic and musical imagination, and two, through energy work and changes in my diet, meditation practice, and generally my existential process of overcoming my fears.  I felt grateful to be receiving what felt like support ‘from above’ for my mindfulness practice and the long process of purifying my mind and body of toxic substances and toxic ideas.

I understood that as I pursued the calming of my mind and the purification of body-mind  energy channels, not only would I heal and operate in the world with more energy and love and less fear, but I would be able to maintain a kind of permanent communication with high forms of consciousness.  This was an incredible inspiration for redoubling my efforts to improve myself.  Just what I needed, and with perfect timing, as if finally after much preparation, I was ready to be able to appreciate this high reality.

As I began to digest more deeply what had occurred, I wondered about the nature and reality of this new relationship in my life.  Despite contradicting my worldview and what I could rationally justify, I felt absolutely drawn, connected, to this being. How strange, I kept catching myself thinking, that I feel intense emotion - love, respect verging on awe, for a being that I’m not sure even exists!  Am I going mad?  How can I cultivate or clarify or deepen this relationship I wondered?

One day after meditating on these questions I received the answer. I heard a voice say, Use your imagination to explore your feelings for me. Draw pictures of me. Write songs for me. Take your imagination more seriously as a cognitive faculty, as a communication medium.

This was a new and exciting idea for me. I had always drawn, coming from a family of artists, and had used drawing to express myself in ways which were very helpful to me spiritually. But it was something new, to think of my imagination, not as a kind of fantasy generation faculty, but as a communication medium.  I thought to myself, it is so interesting that when we say of an experience that it was ‘just your imagination,’ that this betrays a rather deflated perspective on just what our imagination is.  If indeed we have an internal connection to Spirit or Transpersonal/non-local consciousness, then it would make sense that our imagination could offer us a way to communicate in ways which bypassed the limitations of linguistically-mediated discursive thought.

What a surprising idea, to consider images that come to you might not be your own, but sent to you from elsewhere! Of course, your ego begs to differ with such possibilities, as they threaten its very existence - the illusion of its self-created, autonomous existence. But as I got better at distinguishing my ego from my true self, my heart, I began experimenting with paying attention to such feelings - that I am not the author of many of my thoughts...  continued...